The challenge was solved after the CTF ended, but before any writeups had been published.

Looking at Rust code in disassembler/decompiler hurts, so… look somewhere else.

As the name of the challenge suggests, the executable is a Rust-based binary, which targets Windows / 64-bit. The challenge also hints that it might be infeasible to just reveng the normal .text sections and find the flag.

Running rusty.exe, yields the ubiquitous “Give me the flag:” prompt. Entering a random value, it returns “lol. That’s not even close.”

Opened rusty.exe in Ghidra and used the Search -> For Strings… dialog to look for “flag”. Found the string and used the Show references to Address context menu option to navigate to the sole usage (LEA RAX, [PTR_s_Give_me_the_flag:_140020638]).

It successfully decompiled a function in the Decompiler window, but something was amiss; my window turned bright (I use a dark Ghidra theme) which indicated that Ghidra hadn’t created a proper function for it.

In the Listings view, I used the Create Function (F) option on the first instruction (PUSH RBP), which fixed that.

Scrolling a bit down in the function, I discovered the following section:

We can see that the flag is supposed to start with jctf{ and end with } which is a bit odd, since the flags in the JustCTF should have started with justCTF{.

Alas, this is how far I got before the competition ended, but after I got a hint that the flag was hidden elsewhere in the exe, I had to return to crack this open.

The Windows Portable Executable format (PE) is designed to be backwards compatible - that is, if a user tries to execute a Windows binary under DOS, it will normally just tell the user:

This program cannot be run in DOS Mode.

This message is not output from the OS; it is generated from a small 16-bit DOS executable section in the start of the .exe that is known as the DOS stub.

Normally this stub contains the message above and basically MOV AL, 9 / INT 0x21 which is the DOS equivalent syscall for writing to a File Descriptor, in this case STDOUT.

But when I inspected the header fields in the program, I noticed that the header (Ghidra marks this section as e_program) was 4368 bytes long!

The easiest way (using partially Ghidra) to extract the e_program header section into a separate binary, was to select the whole region, and use Copy Special -> Byte String on the context menu, paste it into a temporary file, or directly into something like CyberChef, choose the From Hex recipe, and download the decoded bin. Of course it is possible to cut out the relevant bytes using command line tools, but this time I wanted to check if there was a feasible way of doing it with Ghidra. It would be nice if Ghidra had a way to export a section directly as raw, verbatim bytes, or even better, re-import it into the project as a separate file.

Since I cut out the header region without any PE/MZ header, some non-conventional steps are needed when importing it into Ghidra. 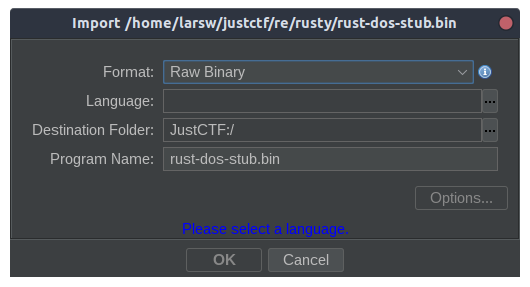 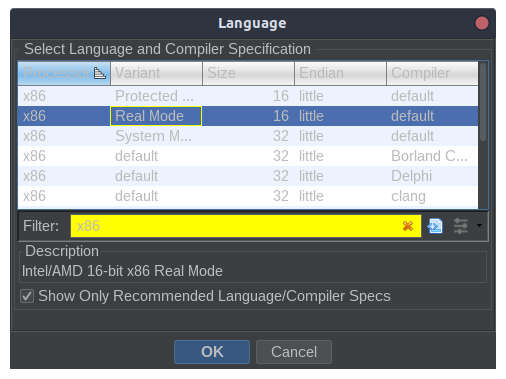 To find out where the first instruction is, we need to go back and inspect the MZ header.

e_ip (Initial IP value) is set to 0x8a - but what does it offset from?

Turns out that we need to take page alignment into account. Since the header up to the e_program section is 0x40 bytes, the current page will be padded with 0x200 - 0x40 = 0x1c0 (448) bytes before the page(s) for the working set of the executable. 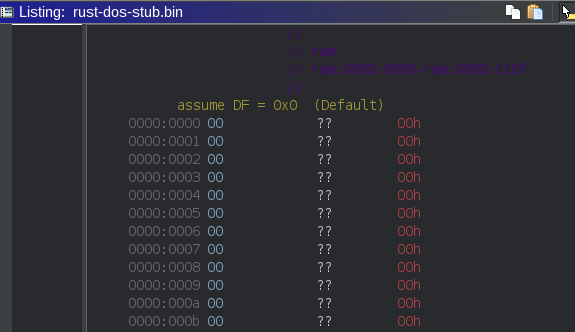 At 0x1c0, we discover the bytes This program cannot be run in DOS Mode.$. Notice the $ at the end? Strings handled by the syscalls of INT 0x21 are terminated by a dollar - not by 0 as you might be used to - or Pascal-style, with the string length stated as a prefix byte.

Since demo scene-related coding was something I did during the mid-90’es, I quickly realize that I’m familiar with most of the stuff going on.

Before analyzing the binary further, I installed dosbox-debug and fired it up. 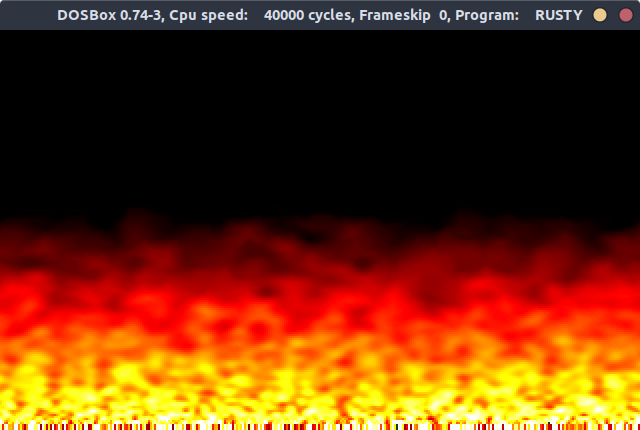 Before exiting the program (with either ESC or Enter), I noticed that for each key I pressed, a asterisk was displayed and merged into the flame effect.

Back to Ghidra. As I mentioned earlier, most of the decompiled assembly made sense to me, so I started to clean up/rename functions until I felt that I had identified all the key components. Apart from setting up “mode 13h” (320x200/8-bit) and a nice palette (doing I/O on port 0x3c7/0x3c8), there was also the standard wait_for_vsync routine, and of course the logic for generating some pseudo random bytes and creating three copies of them on the bottom of the screen, before doing passes to smooth out the rows above. All this was done in a never ending loop with a check for keyboard status / read of ASCII code from keyboard (INT 0x16).

Looking a bit harder on the keyboard loop, I realized that ESC would quit the application, pressing Enter would quit - but do something more first, backspace would move a pointer backwards in an input buffer, and pressing any other key would append them to the same input buffer (including moving the pointer). At most 39 (0x27) bytes could be entered into the buffer - entering more would simply be ignored. The input buffer was located at ds:0x66.

Figuring out the secret key sequence

I had hoped that the initial seed for the pseudo random generator routine would be the key sequence that had to be input in order to get the exe to output the flag upon exit, but that wasn’t the case.

As mentioned in the previous section, pressing Enter would exit the program, but not straight away. There was a bit of code that seemed to work on both the input buffer and another buffer - one located at ds:0x34. Looking at the bytes in that area, gave a hint that there was something hidden there - quite possibly the flag. The buffer was also 0x27 long, and was terminated with an additional $.

I fired up dosbox-debug and started rusty.exe in the debugger with DEBUG RUSTY.EXE, set up a couple of breakpoints (Ex. BP cs:0132) and continued the execution flow (F5).

Having the cleaned up pseudo code in Ghidra side-by-side was a great help understanding what was going on.

There was an additional piece of code that would calculate a checksum by adding up all the bytes in the 0x34-buffer, and check to see if it equalled 0xd9f. If it was correct, the program would output the buffer, else it would output the This program cannot message.

Rewritten in python, the pseudo code looked like this:

With no other a priori knowledge, this exercise would have been nearly impossible to solve, but since we knew that all flags started with justCTF{ I set up the following in a spreadsheet:

Guessing the additional gram gave justCTF{just, so I was certain that was the correct continuation.

Two seconds later - and a big facepalm, I realized that the secret input had to be:

This program cannot be run in DOS Mode.

The simplest explanation is usually the right one.